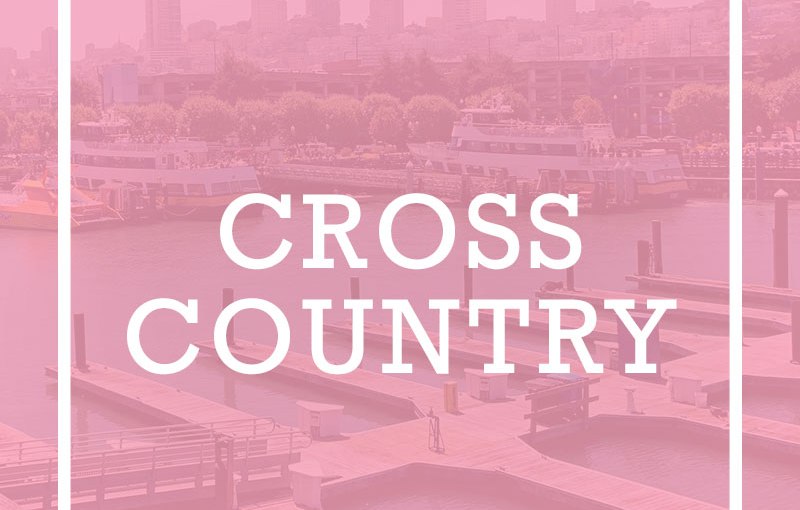 Well the leaves are starting to change, the temperature is starting to drop (it may still be 79 degrees but that’s a drop) and that can only mean that Summer is coming to an end. Although the change in LA isn’t near as dramatic as Fall back home in Iowa, it still brings a new energy that I find inspiring and fuels me to start something new. In preparation for that change, I have one final chapter to my Summer Scroll Through and the granddaddy story of them all Emory and I’s big cross country adventure.

When it comes to traveling, I must admit I’m one who prefers to jump on a plane and be at my destination in a fraction of the time.  However, a cross country road trip adventure has always just sounded so romantic and exciting. Emory is not stranger from driving from Iowa to LA usually making the trip all on his own.  I knew I couldn’t make him drive back again by himself. Plus, I had never really seen much of what’s between California and Iowa. Both of these factors inspired me to tag along for the ride, but I had a few ground rules of course!

So, we decided to make a vacation out of it—five and a half days’ worth of driving and exploring from Los Angeles to Iowa. Knowing we would be traveling in the middle of August (the hottest month) we decided to forego Emory’s typical route through all the National Parks and head North then cut over.

We left after work and headed up the coast towards the Bay Area. We decided to take the scenic route (about 7 hours) and drive up the coast and the PCH and recreate our earlier Summer adventure. The drive was beautiful as always and traffic could have been a lot worse. Taking this route did add and additional 1-2 hours than the inland trip would have but we would argue it was worth it. If you find yourself making the drive DON’T stop for gas in Santa Barbra (take our word for it) and DO stop for food in San Luis Obispo (we stopped at Mo’s Barbecue this time.) We finally got to San Francisco late and completely exhausted. We stayed in a boutique hotel we rented via Air BNB called The Bartlett. It was super cute and trendy, however not the cleanest nor friendliest staff. All things considered though when you take into account, we were staying in one of the most expensive cities, we weren’t complaining.

We headed out about 9:00 am the next morning on a journey to squeeze as much of San Francisco in in a day as we could. Emory had already been, but it was my first time. We headed down to Fisherman’s Warf and grabbed beignets and cappuccinos for breakfast at Frankie’s at Pier 43. Oh my goodness though, people were eating fish and chips that early in the morning, but it actually looked and smelled incredible. So much in fact we went back to Frankie’s for lunch! Not only was it affordable but they claim to have the best fish and they’re right. I have a feeling this place will be a staple anytime I find myself in SF!

After breakfast we caught a street performer act and walked through the Musse Mecanique, the antique penny arcade. Grandma predicted my fortune, we walked down Pier 39, got a great view of Alcatraz (which I didn’t realize was so close by the way) as well as a great view looking back at the city. After watching the seals, we decided it was time to go find the main attraction, the Golden Gate Bridge, at Crissy Field.

Immediately as we got close to the bridge the most perfect sunny day transitioned to foggy, misty, and overcast like magic! We pulled over, snapped a few pictures and continued on our way.  Before leaving the bay area, we checked out Muir Woods, which was even foggier and cloudier! After a close run in with poison oak we decided we didn’t have time for a hike and instead just enjoyed the view. Look what we found?! Another Hawkeye fan with a Subaru… What are the chances?!

Back in the car for the next leg of the journey! We left around 3:30 in the afternoon driving from Muir Woods to Lake Tahoe.  Four hours’ drive through winding mountains, an incredibly bad traffic jam at the worst placed stoplight, and a pit stop at the Eldorado National Forest later and we arrived at our second destination, Lake Tahoe.

Finally, a day with no driving and a chance to relax. Funny and sad how excited I was to just enjoy a day with no driving considering all the driving we had done thus far hadn’t gotten us any closer to our final destination. We were also excited because neither of us had been to Lake Tahoe. We started our day where any adventure tends to begin, Starbucks. I must admit though, it was more out of necessity for wifi access than anything! Next we started driving around the lake and made our way to the Eagle Falls trailhead. FYI there’s a Lower Falls (that is right off the road and no hike required) and the upper falls. It’s a very mellow and short hike to the upper falls but then the keeps going for a great look out of Emerald Bay and eventually opens to a beautiful lake view.

After the hike we had a picnic lunch at the Camp Richardson General Store and a scoop of sorbet at the Ice Cream shop! I felt like we had traveled back in time to summer camp in Parent Trap or Wet Hot American Summer.

After freshening up we had plans for a sunset boat cruise tour of Emerald Bay complete with wine tasting and a charcuterie board! We had an amazing time being out on a boat, watching the sun go down, and meeting another incredible young couple that were visiting from the Bay Area. After attempting to find real food on a Sunday night, we headed back to the apartment and rested up for a big day of driving.

Back on the road and ready to make our way through the desert. Leaving Tahoe, we quickly drove through Reno, Nevada and then cut across the state to Utah (another 7-8-hour drive.) We took a much-needed detour and stopped at the Bonville Salt Flats. After a few attempts at some doughnuts in the Subaru, watching a U-Haul haul down the speedway, and tasting the salt it was back on the road again. Along the way I of course made us stop at the first Jimmy Johns I could find for lunch and before long we made it all the way to Salt Lake City.

Once we got to the cutest Air BnB I’ve ever seen we headed to downtown Salt Lake which was beautiful and incredibly charming. We walked around Temple Square and then scootered to The Green Pig Pub for dinner with a view of the of the city-county building.

Although this would be the second longest day of driving on the whole trip—it was worth it to see some familiar faces. We started with breakfast at Earnie’s Sports Deli in Orem with a college friend before another 8-hour drive. We made a few stops off the side of the road like the site of an old mine explosion, to see the Colorado River at the No Name exit, and the Colorado Sign just to name a few!

Being ahead of schedule we did decide to stop in Grand Junction, Colorado for lunch at Rockslide Brewery and to check out a few antique shops while we walked off our beer. Before long we made it to Denver! Finally! This leg of the road we were fortunate to get to stay with friends. The same friends I stayed with in July mentioned in my Destination Denver post. Now after two years of not seeing each other we were fortunate to see each other twice in less than two months! We went out for dinner at Blue Moon Brewery at which we ran into another friend unexpectedly AND had the most amazing beer flights and pickle burgers. Now, I’m not much of a beer person but with beer flavors like Mexican hot chocolate, cold brew coffee, and a mango wheat (which you can buy at stores and I highly recommend) how could you not enjoy them!

Sadly, it was time to leave and time to get home. Day five’s motto was all drive and no play because a ten-hour drive through mostly Nebraska is not something to get excited about. However, with home being the final destination it was enough to keep us moving forward. Emory was a champ at this point, doing most of the driving and soon enough we were back in our great state of Iowa.

To wrap up one of the most amazing trips and 37 hours of being in a car, I had a weekend at home with my friends, family and love ones. As well as a chance to relax, golf, drive through Ledges State Park, and eat at Jimmy B’s of course (my favorite barbecue place EVER in Boone, Iowa.)

The trip flew by and dragged on all at the same time but overall, I couldn’t be happier with the experience. It gave Emory and I a much-needed adventure before going back to long distance. It was filled with many firsts in cities that will always hold special memories. Most of all though, the trip couldn’t have happened without its primary sponsor, Dramamine. (Ok it wasn’t really sponsored by Dramamine, but it should have been because it’s seriously the only thing that kept me alive!!!)

Now Summer is officially over and we’re headed into my favorite time of the year. This Fall I still have a few more goals to accomplish before a New Year’s deadline! I’ll also be very busy with some exciting projects at work and I’m looking forward to a girls’ get away trip, a visit from my parents, and ALL things Halloween.

Stay Tuned! What are you most looking forward to this Fall?